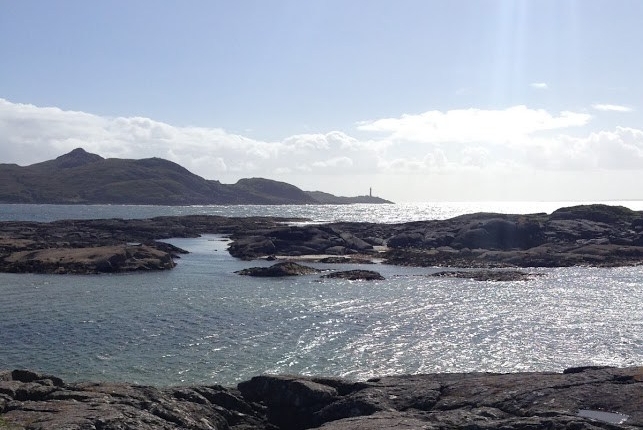 Mull and little Iona nearby, like so many parts of the Scottish Highlands, are places of mystery, at times dark and wet, but always possessing a sense of grandeur and majesty. This is a ‘thin place’ – where heaven and earth seem to meet.

A ferry boat full of excited visitors is making the short journey across the water to a small rugged island off Mull in the Western Highlands of Scotland. With some relief after a long journey, by land and sea, the visitors step ashore on this tiny, but very special place, conscious that they are stepping back in time as thousands of visitors and pilgrims have done before them. This has been a place dear to many Christians—we feel a sense of connection with our early Christian forefathers here.

It is hard not to be awed by such mighty giants towering over our own tiny and insignificant selves. We are no longer the self-confident people that we thought we were, back in the city.

Last summer my daughter and son-in-law and their two children, took a holiday in this area in order to make the visit to Iona. Staying for the Saturday night on the island, they were able, next day, to join the Sunday morning service in the church there, where they were warmly welcomed. What drew them to Iona?

Mystery always appeals. It  entices us to further investigation. There are so many little ‘mysteries’ in life, if we have the eyes to see them. The mystery of human life (our own included) is specially wonderful. We are ‘fearfully and wonderfully made’ as the psalm says.

But of course, the greatest of all mysteries is the wonder expressed in these striking verses:

‘This Christian life is a great mystery, far exceeding our understanding, but some things are clear enough:

He appeared in a human body,
was proved right by the invisible Spirit,
was seen by angels.
He was proclaimed among all kinds of peoples,
believed in all over the world,
taken up into heavenly glory.’

(From the first letter of Timothy, chapter 3:16, (The Message Bible)

These are striking words, coming as if out of context. The writer is in process of writing to his friends when suddenly he is inspired to lift up his voice speaking with a wisdom not his own. Here is a great mystery, the greatest ever, all centred on a person – His name is ‘Wonderful’.

Last year a friend  introduced me to the poetry of Malcolm Guite. I’ve found his ‘Sonnets for the Seasons’ most inspiring . His website and blog are full of a continuous flow of poems for the seasons.

In an interview recently on a northern local radio station, he shared the story of his journey into Christian faith. He recorded several of his ‘mystical’ experiences when he had what he calls an ‘epiphany’ that led him to sense that God was speaking to him.

One incident he recorded was when as a student back-packing around Ireland looking for meaning and purpose in his life, he met a local man on a beach in the North. Upon hearing Malcolm’s name the man told him that he  had come ‘home’, for this was the very beach from which his namesake, Saint Columba had set sail in 568 for Iona where he established  his monastery.

Malcolm’s poems catch the imagination. taking what is concealed and exciting us to explore it till the ‘veil is peeled aside’ and we truly see.  In Malcolm’s own words:

‘He who has ears to hear’, let him hear‘

How hard to hear the things I think I know,
To peel aside the thin familiar film
That wraps and seals your secret just below:
An undiscovered good, a hidden realm,
A kingdom of reversal, where the poor
Are rich in blessing and the tragic rich
Still struggle, trapped in trappings at the door
They never opened, Life just out of reach.

Malcolm Guite, from “Parable and Paradox’

Exciting stuff!  Christmas is not a date in the calendar, but a wonderful revealing of God’s grace. When I began this blog the preparation was done under cover of the ‘Private’ button. But eventually, when ready to go, I pressed that ‘Public’ button and all was revealed in public! Christmas is God ‘pressing’ the ‘Public’ button and going worldwide to share the good news he had been keeping secret until then.

Thank You for journeying with me. Every blessing to you this Christmas time.

3 thoughts on “The Wonder and the Mystery”