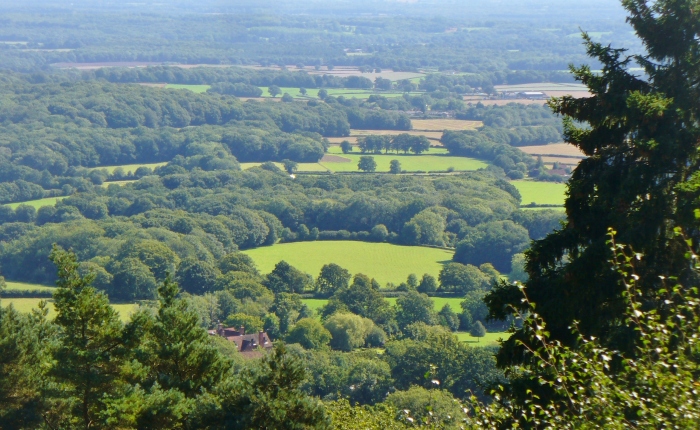 The magnificent panorama of the Weald reminds us that the spirit of the ancient wildwood still survives here.  So too does the spirit of Winnie-the- Pooh and his ‘100 acre wood’.

Where are all the people?

This is supposed to be over-crowded SE England. But where are the people? There are very few buildings visible here. This is one of the most wooded areas in England with an  average of 24% woodland cover, in parts 40%.

Driving through we pass sunlit fields, woods and small coppices, small paddocks with a horse or two, a farmstead seen through the trees.  We travel through picturesquely named villages, Cowfold and Henfield, names that seem to reflect the influence of people upon the surrounding landscape. This used to be an area where the pannage of pigs was practiced, as it still is in the New Forest. But this is not good arable land. As at Knepp, the heavy clays of the Low Weald do not make rich land for arable crops.

The older trees in these woods carry history in their growth rings. They have a story to tell. They would have witnessed the Romans as they constructed Stane Street to link Chichester with London across the thick woods and wet clays of the Low Weald.

Apart from some iron smelting, the Anglo-Saxons made few inroads into what they called Andredesweald.  By the time of Domesday there were only few records of settlements in the Weald.

Following the Norman craze for deer hunting it was inevitable that places like the original Knepp estate and Ashdown Forest became centres for the ‘sport of kings’. King John took over Knepp as his own deer park. Other kings followed suit. In the Knepp archives there are recorded visits by Henry 111, Richard 11 and Henry VIII.

If we were visiting this wood in mid January a few centuries ago it would have been echoing to the sound  of men’s voices and of axes chopping down hazel coppice like this. Nearby a billow of smoke rising above the trees would indicate charcoal burners at work producing fuel for one of the local iron furnaces. This was part of the important Wealden iron industry which lasted until the rise of coke furnaces in the 18th century.    Hammer ponds and furnace pits can still be seen in various places, the sounds of busy activity long gone. Now the sites lie abandoned and forgotten, hidden in thick woodland undergrowth.

Sadly today few of these old coppices remain in use and the woodland craft skills have largely died out.   But coppicing is still active in some places  as in the traditional use of Sweet Chestnut for the production of poles for growing hops, and in some small-scale woodland craft businesses.

There are Bears in these woods!

In the central High Weald of East Sussex is Ashdown Forest. Here we are in Winnie-the-Pooh and Christopher Robin country.

The quiet simple stories set in Ashdown Forest have become big business in the cartoon film culture worldwide. Somehow I think unassuming Pooh would have been somewhat bemused and shell-shocked by how famous he has become!

Happily you can still read the original stories with their simple line drawings. Visitors can still walk though Ashdown Forest in the steps of Christopher Robin, Pooh, Piglet and their friends and play simple pooh-sticks on the original bridge.

As we move east through the East Sussex Weald we begin to enter hop country. There are hop drying kilns everywhere with their characteristic cowls, Dixter is one of my favourite gardens.

The Weald is a beautiful and precious throw back to our nation’s ancient woodland landscape.

“We have carelessly lost so much of our woodland  and so much of our historical and literate landscape with it ….. we are left with small isolated pockets, leftovers.  These have become the guardians of our dreams of greenwood liberty, of our wildwood, feral, childhood selves”

How glad we are that the wooded Weald has survived for the benefit of us all.  The best way to preserve our woods is to start to relearn how to maintain and make them useful once again, instead of importing 95% of our timber from overseas as we do at present.

“It is not so much for its beauty that the forest makes a claim upon men’s hearts, as for that subtle something, that quality of air, that emanation from old trees, that so wonderfully changes and renews a weary spirit.”
Robert Louis Stevenson

6 thoughts on “In Wealden Woods”