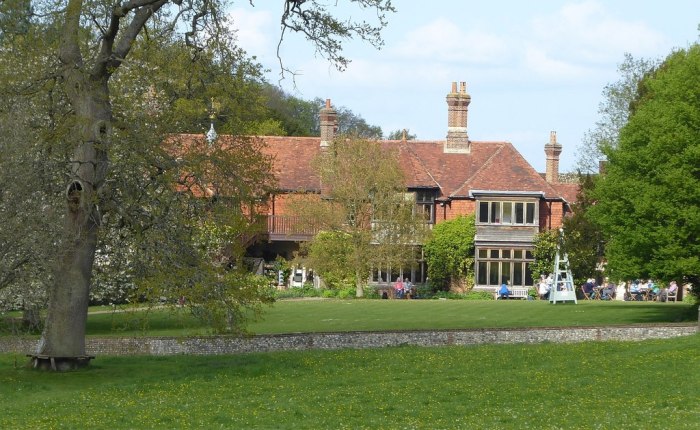 Tucked away in a quiet part of Hampshire, nestling in the narrow lanes  beneath the northern slopes of the South Downs, lies a place of pilgrimage for lovers of the natural world.

It was in this quiet village that the world renowned Gilbert White was born  in 1720 and served as Curate for much of his life. His house, ‘The Wakes’ (photo above) is now a museum dedicated to his work and includes his 25 acre garden sitting under the wildlife-rich woods on the slopes of the Downs, the Selborne ‘Hangar’,  where  ‘Nature hangs her slopy woods to sight‘.

The house was owned by the Oates family in later years and also houses the Oates Collection which celebrates the lives of 19th century explorers Frank Oates and Captain Lawrence Oates who travelled with Scott on the ill-fated  South Pole Expedition.

Jane Austin’s house at Chawton was only 4 miles away. She was 18 when Gilbert White died and would have known about his work. Her brother wrote a poem praising it.

‘The Natural History of Selborne’

This classic book, one of the first written works on natural history, is a collection of letters to two other naturalists. First published in 1789 it has never been out of print, having gone through 300 editions. It also includes a section ‘antiquities’ on the local geology and archaeology of the area.

Gilbert White was no armchair naturalist, gaining his knowledge from reading other men’s books. His approach was refreshingly new for his age—his were proper ‘field studies’ based upon his own meticulous details of the plants and animals he noticed as he walked about his local patch with notebook in hand.

He wrote:  ‘The investigations of the life and conversations of animals, is a concern of much more trouble and difficulty, and is not to be attained but by the active and inquisitive, and by those who dwell much in the country.’

We watch him sitting in the ‘sheltered unobserved retreat‘ in his meadow, observing the swallows swooping over the grass, or see him pausing before going into the church to enjoy the swifts darting over the churchyard. We follow him on a pastoral visit to a villager, stopping by a pond to look for signs of frog spawn, or checking a piece of hedgerow to see if a particular nest of eggs have hatched.

We’re invited to share with him in these delights as he records the details of each bird’s behaviour, migration, nesting period and song.  Insect life, mammals and plants were as carefully recorded. His records of birds singing throughout the year is impressive. Here’s a delightful note from Feb. 12th 1771 :

“My musical friend, at whose house I am now visiting, has tried all the owls that are his near neighbours with a pitch-pipe, set at concert-pitch, and finds they all hoot in B flat. He will examine the nightingales next spring.”

Many of the birds he mentions are now on the endangered ‘Red List’. He speaks of seeing large flocks of Stone Curlews in the field of a farmer friend near Chichester. Like many other birds he mentions, these are a disappearing rarity today.

A hundred years before Charles Darwin made his studies on the influence of the humble earthworm, Gilbert White was writing:

“Earthworms, though in appearance a small and despicable link in the chain of nature, yet, if lost, would make a lamentable chasm … worms seem to be the great promoters of vegetation, which would proceed but lamely without them.” 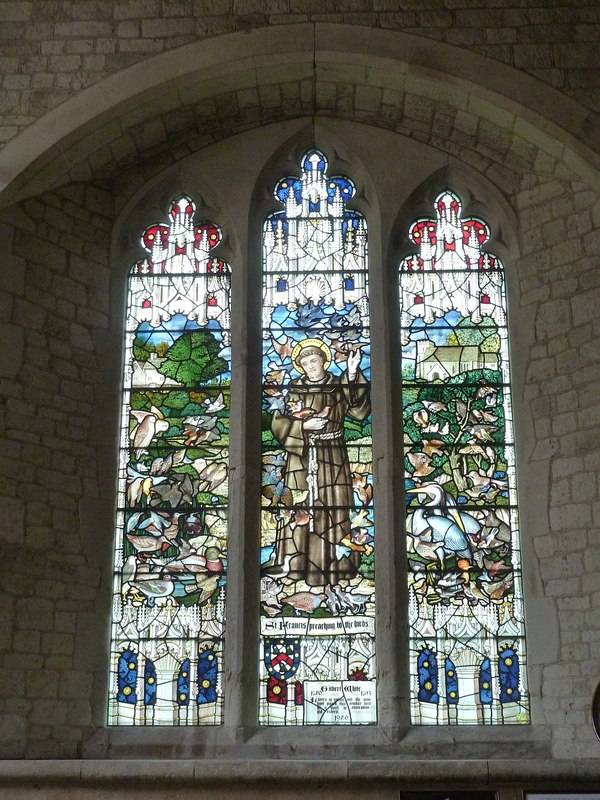 The lasting Legacy of Gilbert White is not merely a charming reminder of  rural English countryside of a bygone era,  but a lesson for all lovers of nature in spending time listening, looking and exploring the natural beauty of our local area. We don’t need to travel far either, for White covered his beloved local patch on foot always with that notebook ready to hand.

In St Mary’s Church in the village, a beautifully fitting  memorial to White was added in the 1920’s, the ‘St Francis Window’, picturing St Francis feeding the birds. All the birds pictured in the stained glass were recorded in the book. It makes a fine tribute to a great naturalist.

Thanks for your company  – Keep feeding and watching your own birds this winter!