A  beautiful BBC documentary recently featured the Lost Gardens of Heligan (the elder ‘sister’ of the Eden Project). We were given a delightful look at the many lingering features of the garden’s once glorious past.

The Lost garden of Heligan

There is a peace about the place that is hauntingly attractive. Left undisturbed for 100 years there is still  a sense  that something wonderful used to be here, and in some ways still is. Wild life has thrived here over the decades and it still does despite the recent re-development of the gardens . One of the parts of the garden visited was the old potting shed.

Being a keen gardener, I have a close affinity with ‘potting sheds’. They are the gardener’s indispensable work place that lies behind the outward show of the garden. The atmospheric Heligan potting shed is full of memories. There are tools, sacks, clay pots, and trays, and the musty garden smell of the past fills the place. Most poignant of all are the pictures of the gardeners who worked here up until the First world war claimed so many of their lives.  Since the War the garden fell into disrepair and became a ‘sleeping beauty’. Then, in recent years Tim Smit and his team of  visionary garden restorers stumbled across the lost estate and set out to re-awaken it – a moving, romantic story. Much of the original beauty remains, they have even restored the old practice of charcoal burning, but now the garden has come to life,  is productive again and open to visitors.

In Tim Smit’s words ‘there is a calm and peace about gardening  with the grain of nature; husbandry ( a lovely old word) that allows wildlife to thrive… Working with the seasons roots you to the land. Every part of the year has a purpose, from the spring hope that comes with the early bulbs onwards. It is like being let into a secret –one feels full of hope.’

What a tragedy the war was. How much our country lost, not to speak of all the nations involved. The lives of so many promising artists, poets, writers, composers were  cut short in those desperate Flanders fields. One of my distant relatives, Leonard Sutton lost four of his 5 sons in the conflict and it was a huge loss not only to the family, but also to the family seed business.

Yet, despite all the mayhem, the wild life was still there. It was reported that some birds didn’t stop singing and those famous red Flanders poppies  made their calming presence clearly seen in the mud and turmoil. It was as if nature was trying to heal the wounds and cover up the destructive deeds of men. Nature has an amazing ability of re-generation.

I remember, as a student, visiting the Rothampstead (Agricultural) experimental  centre and seeing the patch of land that had been fenced in and left untouched  since the 1880’s.  Today it is a mature mini wood. What cheering resilience. Despite us, nature  will thrive if given the chance.

These are inspiring stories of restoration, but there is a far more ancient Lost Garden, a forgotten ‘Paradise’, out there waiting to be fully restored.

Looking around our world today we see many traces of Eden, often just struggling to survive. They stir in us that deep  feeling that something is not right with the world as it is today. There is still a bit of us that hankers after a lost Eden in the distant past.

The last two chapters in the Bible  point us in this direction with a picture of  a new ‘Eden’,  a new  heaven and a new earth, where God dwells in the midst of his people. In God’s hands there is a future and a hope for this world, despite all that we have done to it.

‘Traces of Eden are still seen below...
…Then heaven eclipsed so long, and this dull earth
Shall seem to start into a second birth,
Nature assuming a more lovely face,
Borrowing a beauty from the works of grace,
Shall be despised and overlook’d no more,
Shall fill thee with delights unfelt before,
Impart to things inanimate a voice,
And bid her mountains and her hills rejoice,
The sound shall run along the winding vales,
And thou enjoy an Eden e’er it fails.’
(a new Christian re-discovering the beauty of nature with newly-opened eyes)
from ‘Retirement’ by William Cowper 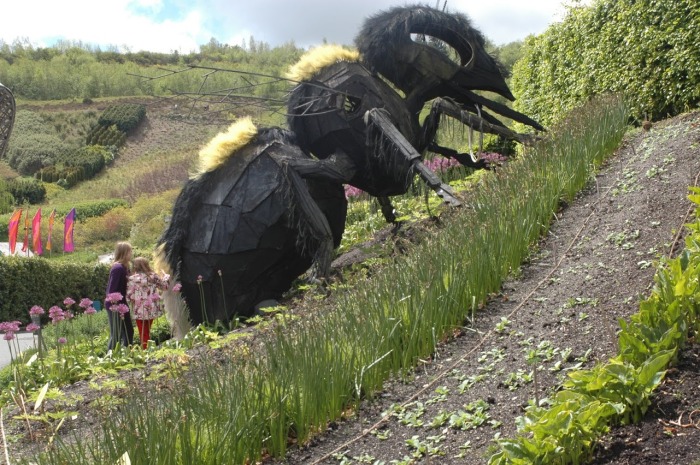 At the Eden Project.  Don’t worry, it’s friendly and it won’t sting !